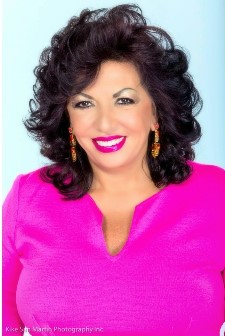 Carmen Harra is an internationally acclaimed intuitive psychologist, best-selling author, radio show host, relationship expert, and TV personality. In her teens, Carmen became a singing sensation in Europe. She released twelve albums that became instant hits. Carmen first visited America for a singing engagement but decided to stay for good after meeting the love of her life. Here, she reinvented her career and became a psychologist, earning a Ph.D. in Psychology. Carmen had been intuitive since a near-death experience as a child, so she decided to combine her ability to see with her knowledge of cognitive therapy--something that had never been done before. In 1998, Carmen began writing her first book, Everyday Karma, which became an international best-seller and was translated into over 20 languages.

Since the start of her illustrious career, Carmen has been featured in numerous publications such as The New York Times, New York Post, New York Daily News, The Hollywood Reporter, Vogue, New York Magazine, US Weekly, V Magazine, Elle Magazine, and many more. She has been a guest on countless shows like Good Morning America, Good Day New York, The View, Fox News, the Today show, CBS' The Early Show, What's the Buzz, Univision's Primer Impacto, Telemundo, Ecuavisa's America Vive, the 10! show, The Strategy Room, BetterTV, Nightly News with Chuck Scarborough, Happy Hour on ProTV International, etc. Carmen has also designed her own line of jewelry for QVC.

Carmen is the author of the international best-seller Everyday Karma, and six more critically acclaimed books: Decoding Your Destiny, Signs, Symbols and Secrets, The Trinity of Health, The Eleven Eternal Principles, and Wholeliness. Her seventh book, The Karma Queens' Guide to Relationships, was released by Penguin Books in the spring of 2015. Carmen is now working on her next book.

Carmen is a co-chair in the Vital Voices Global Partnership, a delegate member of the Women in the World Foundation, and an honorary member of the Alliance for a New Humanity founded by Al Gore and Deepak Chopra.

"Life is all about creating a vision for yourself. And through that vision, manifesting the best version of yourself," says Carmen, smiling warmly. "Reality reflects what the mind projects."